Personally Australia was always just a big, red, dry continent which never appealed to me as a major travel destination.

Working in London with tons of "Ozzis" and "Kiwis" though made me wonder what it is about this part of the world, that they are all so laid back. Well and as I had to stage time until it is summer in Alaska, my ultimate travel destination, I thought I give Australia a shot.

Man was I wrong about this Continent !!!

In the first week visiting Australia, Thomas and Poonam showed me a totally different side of it. Beaches, beautiful coastline, stunning country side and loads of more nature... Which made me change my mind about Australia right away and I decided to stay longer than initially planned.

After a week in the suburbs and surroundings of Sydney I than visited Nat and Ben who live "bang on" in Sydney and right next to Harbor Bridge to encounter the city a bit more. The first impression... this city just has the right balance of nature and big city atmosphere/convinience/diversity there should be... downside a minimal 24 hour travel back home.
After the week and Bens birthday I than moved on to Brisbane, where I picked up my "home" for the next 36 days - a camper van. This shall also be a new experience for me as I never in my life was a big camper and maybe camped 2 or 3 times in my life before.

So far so good :-) I am now 5 days on the road and am enjoying it a lot my first stop was Byron Bay and surfing classes. I have to say surfing is not rocket science, means I will keep it up over the next couple of weeks while cruising from Beach to Beach :-)

As of now I am on my way to the Glasshouse Mountains for some hiking before going back to the coast-line. I will keep you up to date on my camping and surfing experience of the next couple of weeks but also wanted to use this blog entry to say a big THANK YOU to my last three hosting "Families"
- Mat and Tash with Charlie and Thomas who I stayed with in Singapore and who showed me the city from a different side and were super patient with me as a guest

- Thomas and Poonam with Shaan and Mahii who included me right of the first minute into their family life and showed me the surroundings of Sydney
- Nat and Ben who were perfect hosts in Sydney and spent tons of time with me....

You guys equally rock and made me feel super comfortable over the past weeks, also you  changed my perceptions of your home cities! Having hosted tons of guests over the past years myself I can honestly say all you guys a grand hosts but out of it all I enjoyed most just spending time with you guys and your families: It was great to see where and how you live!

Posted by Joe's Adventures at 7:12 AM No comments:

In December last year I meet up with my friend Markus in Zurich and we decided to run a marathon in 2012 together. This would, for both of us, be our first marathon ever. A couple of weeks later we had found the venue of choice: The Singapore Sundown Marathon on the 26th of May. I am not sure if we at the time realized, what we would actually sign up for in terms of humidity, but certainly liked the idea of running a marathon at night. With the venue and date chosen, I set off to start the training.

The training regime:
- I initially started out to run 3 times within the week for about 6 km each and then a long run on the weekend for as far as I could get.

- The long runs over time, then became longer and longer up to 30 km runs of which I should have even done more
- Combined with all the running I also started to workout again to strengthen my core and back
- The training regime was all no problem as long as I was in Banlung, where I didn't have much of a distractance. But the last month before the Marathon I actually started traveling through Vietnam, thats where it started to become challenging: to go for runs regularly. It didn't work anywhere close as I wished.

The implications:
- Running became fun: While I always thought, that running "comes easy to me", I guess can only now say that I am really enjoying running. 10 km runs in the morning became real fun, as they were no hard work anymore rather performance test on seeing if I can shape off another minute or two.
Also the long runs became exciting as I was interested to see how many kilometers I could clock down and how I progressed over time. 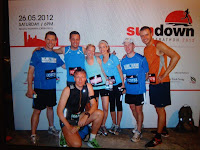 - I lost the last bit of weight I wanted to get rid off: I started my travels in August 2011 with weighting 96 kg and while I lost already a significant amount of weight by Christmas (though thanks to my Mams cooking and super-delicious Christmas biscuits, I put 3 kg right back on during my stay over the holidays in Germany). By the time I was ready for the marathon I weight 76 kg - which arguably is a bit to low for my hight but every extra kg you don't have to carry around for 42 kilometers counts :-).
I guess I can only recommend a Marathon training for weight loss. No matter if you are actually going to run one or not. I guarantee you, you will be dropping weight just like that, while eating like a American Football Player. Needless to say, that you need to keep up the running to not have an YoYo effect.
- I lost 2 toe nails: When I started the marathon training I only had, lets call them "sub-optimal", trainers available, which were a bit to tight in the front. Well I payed the price for it... as the running and kilometers increased 2 of my toes turned blue and about 3 weeks later the toe-nails fell off just like that. Scary, but they are, incredibly enough, grown back normally. Also once I had proper fitting running sneakers that wasn't a problem at all anymore. 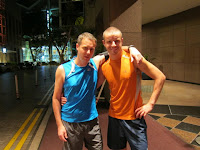 - I got back my old achilles tendon injury: If you read long distance runners material, you hear a lot about how to avoid injuries as repetitive long distance running is increasing your risk for injury potentially. So you are supposed to switch up as much as possible: the surface you are running on (gras, concrete, gravel, ...), the shoes you are running in (runners, sneakers, barefoot), the tracks (up-hill, down-hill, flat), the speed (intervall runs, sprints, regular pace....) and I did it all... nevertheless my old achilles tendon injury broke out again. I was lucky enough to have a friend who gave great medical advice on how to keep it from stopping me running. (By the way if you are interested in a book about running have a read in "Born to run" - a very good book)
- I was eating like a "Scheunendrescher" and sleeping like a baby: Training for a marathon was really going to my reserves but it had great side effects. I was able to eat about just anything without having to have a bad conscience, my water consumption on just every day increased significantly to a healthy level and whenever I hit the bed I slept just like a baby and woke up well rested.

The run itself:
Markus, had actually motivated a whole group of friends from all over the world to run the Singapore Marathon with us. So we ended up to be a group of 7 runners who took on the half-marathon and full marathon distance. Except Markus and myself, all the others had run marathons before. 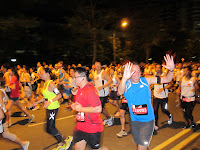 Then after all the training and build up to the Marathon, May 26th was there. The race started at 12:30 midnight and Markus and myself lined up at the 5-6 hour marker as we were really concerned about the humidity (it hadn't rained for the last 3 days) and wanted to go slow at it, to be able to finish it.
The first 5 km were a drag. To many people were let go at the same time and the track was to narrow. What I also had underestimated was the heat that over 20,000 runners create themselves... not just was it super-humid that night but also the runners themselves added to the heat and I was basically soaked after the first kilometers. Then after kilometer 5 the field started to be less crowded and I got into my running pace until km 15. After kilometer 15 it seemed like the km 19 marker did just not want to appear and a eternity away. Well at least thats how it felt and I totally got out of my running pace and started to get annoyed by myself. Luckily to set that off, it started to rain which was a great cool off and re-hydration was not as much of a concern anymore as it poured down on us. I still "have to find myself a pacemaker or I am not going to make this" I thought, which I did by km 23. I basically have to thank a unknown lady who ran a nice, smooth and contant pace and whom I could comfortably follow. Her running got me through to km 36 at which she, seemingly effortlessly, increased her speed and I couldn't follow anymore. So the last 6 km were on me and I struggled with them... After running the last 17 km in a thunderstorm I now started to get cold, my hip started to stiff up and I started to take long walking breaks as I was exhausted. But I pulled through and made my way into the finish after 4 hour and 42 minutes.

The training up to the marathon was actually more fun than the marathon itself and I will keep on running and signing up for half- and full-marathons as the side effects are only positive.
I also want to take on a normal marathon to see what time I can actually achieve under normal circumstance and also see if there are any marathons out there which are challenging as well. For example a friend of mine and experience long distance runner recently ran a marathon on a frozen lake in Russia... certainly worth the adventure, no ?!
Posted by Joe's Adventures at 5:23 PM 1 comment: