Over the last 3 days I reached out to friends who have offered to help out financially should I find a project worthwhile to support. Working here in north-east of Cambodia I have found one and got a fantastic response on my eMail. I will publish the donor-list within next week but as for now enclosed the background:

The province I am currently volunteering in is called Ratanakiri and is one of the poorest areas of Cambodia. Mainly because it was heavily bombed during the Vietnam war, the longest ruled by the "Khmer Rouge" and as the population mainly consists of indigenous people who are illiterate and do not speak the official Cambodian language "Khmer" rather their own local tribal languages. Globalization though has not stopped at the doorstep of the indigenous people living in this area and there are many challenges indigenous people who live here are facing: land expropriation to build rubber-plant plantations, deforestation so the valuable wood can be exported to Vietnam and the consequential cutback on their living environment to name only a few.

United World Schools (UWS)
UWS is a small UK based NGO which is focusing on educating indigenous people in Ratanakiri, trying to educate indigenous children, teaching them how to read and write, encouraging their creativity and providing them a safe school environment. Hereby their focus is sustainable education, so it is made sure indigenous people will be educated as teachers, schools are build by indigenous communities themselves and that the Cambodian government is supporting these actions as well. UWS schools are very successful and receive a great respond in the indigenous community.

Whilst traditionally indigenous children would have to help their parents with the farming - parents now are sending them to school realizing the necessity of preparing their children for the future. I have seen classes of 100 children learning to read, write, being creative by drawing, playing with Lego and much more and I was impressed by the work UWS does and by what they achieved. They have build so far 11 schools with the 12th being financed at the moment. UWS is concerned on the size of their project here as they want to keep being effective and have a sustainable size so they will after the 12th school shift their focus on building new schools on Sri Lanka, trying to replicate their successful concept. So if you want to support UWS check out their webpage www.unitedworldschools.org and I am sure any further donation will be very welcomed.

The Project:
UWS made me aware of three indigenous communities, which have problems accessing water in their area and a great amount of effort is spend every day to transport water. These three communities would significantly benefit from having a well locally available to access water. Also the UWS schools would benefit from having water available as you can imagine a school with around 200-300 children uses a lot of water. Building one well costs 1500$ and I will be financing one by myself. So I reached out to friends of mine to see if we can get another 3000$ together to make a difference in about 1000 indigenous peoples life and the respond is overwelming! Within 24 hours we got the majority of the money together to build the 3 wells.

The schools:
Jong: Jong is the 11th school built by UWS in 2011 in a one of the most remote areas in the Ratanakiri Province. The school has 100 students enrolled in them and 150 families living in the Jong community. (In general a family has an average of 6 family members) 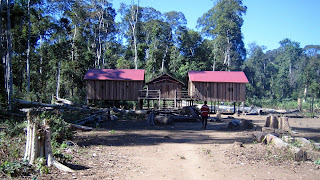 Tien: The school in Tien was built in 2005 and has currently a 115 students enrolled in the school. The Tien community has 150 families. 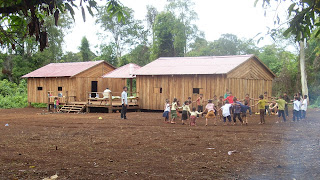 Takok Phnong: The school in Takok Phnong was buildin 2009 and has 200 students with 110 families living in the community and other communities sending their children. 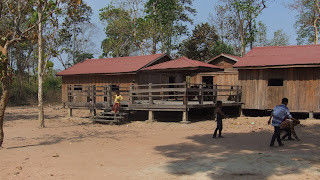 I will keep everybody up-to-date on the progress of building the wells over the next weeks.
A big big THANK YOU again to everybody who contributed to this - you guys are great !!
Posted by Joe's Adventures at 3:21 PM