... and already had so many great experiences, that I don't know where to start, so this blog-entry might be a bit all over the place and therefore in bullet-point-style:
- Phnom Penh: I guess I start with Phnom Penh and my first impressions of Cambodia. Phnom Penh

was a great bustling city to visit and it is unbelievable that this city just 30 years
ago had been totally deserted by the "Khmer Rouge" who forced everybody to move into the country side as the instutiated their rual communism with brut force. Even though only 30 years re-established Phnom Penh certainly has its charme. Surprising to me though was the amount
of high-end luxurious cars driving on Phnom Penhs streets (Mercedes S500, M63, G63 - Audi S9, W12, Q7 - BMW M3, M5, X7 - Range Rovers - L

exus SUVs) considering the average year-income of a Cambodian is at 550 US$ there must be a big upper class but an huge amount of population living below the average year-income. All in all Phnom Penh was a nice city to get a first impression of Cambodia - it has a nice vibe, some beautiful sights and people are very friendly and helping.
- Cambodian life expectation: Here in Cambodia you hardly see any old people around - researching this fact I found out that the life-expectations for Cambodians is only at 63 years and only 4% of the Cambodians are actually 65 and older mind-blowing considering in western countries being 65 counts you still into the workforce.
- Banlung the city: Is the place I am staying in for the next 3 months has certainly its charme as well - located in the north-east of Cambodia its Province bordering Laos and Vietnam, the city has about 25,000 inhabitants a couple of paved streets but the majority are dirt roads. This fact gives the city its nick-name "The red City" as the ground here is red and about everything is covered with a small layer of red dust. So I already made peace with the fact that I for example won't wear clean cloth for the next 3 months or that washing your hands about 20times a day to get the dust off is not working as 2 minutes later you will have red and dusty hands again but that is only a small fact about Banlung. People here make people from Phnom Penh seem unfriendly,

here everybody is constantly smiling and laughing at you, always helping and very attentative. People are honest (so for a change no rip-offs at the market or in shops cause you are a foreigner) and a lot of people speak English . This is mainly based on the fact, that here in Banlung are many NGOs based as the north-east of Cambodia is certainly the poorest area of Cambodia and jobs at NGOs are very well paid and one of their pre-requisits is English. You should now think that there are tons of foreigners here - but that is actually not the fact. Most the time, NGOs have their headquarters in Phnom Penh where foreigners are working and than in the local areas they consist of 100% local people. Other than dusty streets Banlung has not much to offer: one ATM, the obligatory one or two karaoke places, about 10 hotels (the NGO visitors have to live somewhere :-)), a market and loads of homegrown shops - but certainly you can get everything here.
- Yak Loam Lake: One of the big natural attractions in Banlung is the "Yak Loam" lake (see picture) just 3 km away from the city center a glass-clear volcanic lake surrounded by bamboo 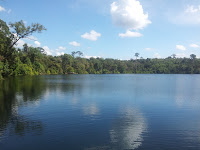 and only at certain places accessible to take a swim - which I actually did last weekend. When I was about to leave 6 Buddhist monks showed up who convinced me to get back into the water
and go for a swim with them... what a joyful and happy bunch of guys they were - and what a experience for me. When I was leaving they invited me to come to their Podga (convent) to visit
and if I like to spend a weekend of meditation with them, all I have to do is shave my head and get into their traditional clothing. - certainly something I am considering.
- Starry Sky: The other night I was just about to leave the school after t 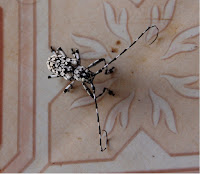 eaching evening class, the city had a power outage (which happens about 4 times a day) - problem was I had forgotten my flashlight at home so I had to make my way home in the pitch-black dark depending on little motorbikes or cars driving on the streets to actually see where I am going... in the beginning being a bit stressed about actually not finding home I recognized the starry-sky above me - breathtaking... while I have seen a starry-sky in the ecuadorian Oriente which was clear and so close that you had the feeling you could reach the stars - the sky here has so many stars it is unbelievable, so instead of searching much futher I sat down and enjoyed the view until the city got its power back again :-). Nature creates such beautiful things around us....
- Cambodian hangover-food: Cambodians eat as a hangover-food no heavy meat and dough based cousine like a greacy Burger or Kebab - no they eat sweet beans with curshed i

ce and coconut-milk. Now for my stomach that wouldn't be anything if I would be totally drunk - but that will most likely not happen here anyways (based on the lack of bars, clubs and culture of going out with friends in the evening) so everybody who knows me - knows I got a sweet tooth so I am loving this "hangover-food" :-)

P.S.: one of the office buildings used to 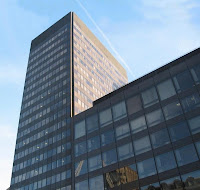 be my old office in London (6 Bishopsgate) the other building is my new office here in Banlung and I got a open-air office which I am loving :-) thats how office-buildings should be (I leave it up to you guys to guess which building is which;-))
Posted by Joe's Adventures at 1:15 PM