After the last couple of entries you know already that I

a) had a awesome HongKong party weekend
b) arrived to,eall well in Cambodia and
c) am kinda miss South America :-)

but I am now since good 72 hours in Banlung and think I am going to like it here as well :-) Well what is not to like about living in a city where everybody smiles at you and is kind, where you have an open air office, where strangers sit down for

lunch with you so you don't have to eat by yourself and where surprisingly a lot a people speak English....

But lets start back in Phnom Penh where I had some visa problems as the immigration office kept my passport to "process" my visa - which normally takes 24 hours, wellafter 3 days and plenty of calls I still

didn't have my passport back - so I started to get annoid and realized with mentioning to go to the German embassy and some extra dollars for the right person it can get done within 1.5 hours. So on Thursday I made my way to the Phnom Penh station at 6:30 a.m. to catch the bus to Banlung my new "home" for the next 3 months - only to find out that also in south-east-asia schedules are a rough time estimates as well... I actually wonder if any cultures other than the japanese and german are actually on time... the South-Americans are for sure not, the North-America

ns not either, the Africans are not, most of Europe not, the Carribean, Chinese and Indian not either... Well thats just a rant on a side note ;-)

The bus ride to Banlung was a bit rough on the last 3rd and tight for a 1,86m individual but it certainly was entertaining.... I was travelling with a party of about 15 old ladies who were delighted to have guy with them who they could speak to - well in Khmer (the local language) :-) not in English... that didn't disturb them :-). Than taking a break the bus-diver couldn't get fast

enough out the bus without pulling the handbreak, so the bus started to roll approx. 20m backwards till he had jumped back on again and stepped on the break. The controlled landmine explosion for which we got hold up on the street was certainly though the most "exciting". That puts it in your face that Cambodia is still the country with most landmines in this world... the concept of landmines is sick but actually listening to the explosion of a couple of them close

by gives you goose skin and seriously it actually sounds like it would kill everything in a 2 meter radius rather than it "just" injuring you... Arriving in Banlung I had a very warm welcome from the school staff I am working with for the next 3 months and got shown my new home before I got invited to come along to a cambodian wedding. Expecting a great cultural expirience, I was all for it. Now I heard from my friend Ting how chinese weddings are and I guess 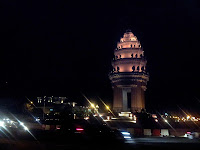 cambodian weddings are not much different - following sequence: Arrive around 6:30 p.m. and greet the Bride and Groom at the door for about 10 seconds (not even enough time to congratulate them), then enter the room and be totally stunned as there are about 800 guests (no kidding) and thinking this is going to be a great party, then sit down at a table with strangers and start to eat while way-to-loud-asian-music is played, Cheers a couple of times with people who come by, once finished with the food get up and leave a envelope with money in a treasure box before exiting the venue - by than it is around 8:00 p.m. and that is it!
Than on Friday I was invited to another wedding which

was excatly the same procedure and on Saturday as well... to the defence of Cambodian weddings - on Saturday there were a couple of teachers from the school as well and we made our own party afterwards - but wouldn't we have been there than that wedding would have ended at 8 p.m.-ish as well this way it at least latested until 23:00... well and Sunday there was another wedding scheduled but I got out of it... apparently it is wedding season for the next 2 months :-)

[Lisaein Haii]
Joe
Posted by Joe's Adventures at 7:50 AM